After the surprising glaze results when Amy from the pottery club put satin white over the top of tenmoku and produced the leopard print, I have been wanting to try a few other things. Here is the next result which is lavender over the top of tenmoku, drizzled over with an eyedropper. It gave a sort of bronze effect, except for the inside where it pooled at the bottom and showed the lavender in an almost metallic look. 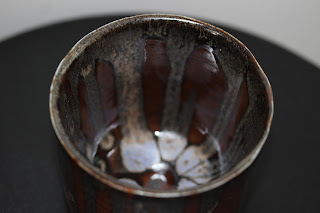 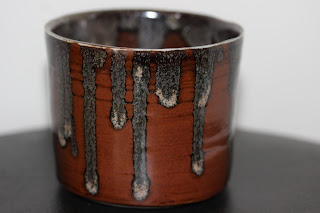 Expect more in the weeks ahead.
Posted by Caroline at 18:29